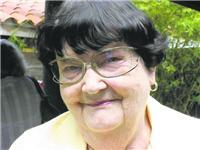 Sigrid Elizabeth (Hettich) Stearnes, 82, of St. Augustine, passed away after a brief illness Saturday, April 5, 2014. She was born in Stuttgart, Germany, on March 23, 1932, to the late William and Elizabeth Hettich, and was an only child. After marriage, she immigrated to the United States, became a U.S. citizen and lived in Virginia before relocating to St. Augustine. She is survived by her four children, Dolores Beedle of Green Cove Springs, Rebecca Cintron of Boston, Ramona Cintron of Jacksonville Beach, and Kenneth Dale of St. Augustine; two grandsons, Kenneth Dale and Kevin Dale of Palm Coast.

Sigrid was an untiring champion for animals and their humane treatment through support and adoption. A visitation will be from 11 a.m. to noon on Saturday, April 12, 2014, at Ponte Vedra Valley, followed by a funeral service starting at noon.In lieu of flowers, the family is requesting that donations be made in her honor to a nonprofit cat and dog rescue in St. Augustine: Wags & Whiskers Pet Rescue, 1967 Old Moultrie Road, St. Augustine, FL 32086. Please sign the online guestbook at www.pontevedravalley.com.