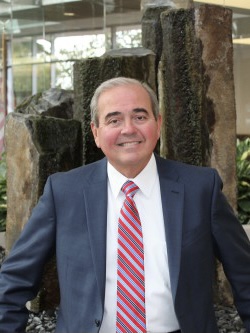 Alan “Al” J. Copertino, 71, passed away peacefully on Friday, October 22, 2021, in Community Hospice Center at Ascension St. Vincent Riverside. He was born in Queens, New York, to Alexander Copertino and Emily Konicke.  Al graduated from Martin Van Buren High School, attended Queens College and received his Juris Doctorate Law Degree from Hofstra University. Al is survived by the lifelong love of his life Ellen, who he married on June 7, 1970.

Al served as a partner for Kenneth Adler & Associates, litigating civil matters in front of all levels of the New York judiciary system for more than 20 years. While living in New York, he ran for public office, launching a campaign for his election as New Hyde Park Trustee in 1996. Upon relocating to Jacksonville in 2001, he embarked on his second career in real estate. He served as Gibraltar Title Services General Manager for 15 years, where he was affectionately known as “Big Al” among his fellow co-workers.

A lifelong sports fan, Al was the Head Coach of his son’s roller hockey team, earning the local level championship in 1996.  In his spare time, Al enjoyed spending time with his family, relaxing at beach, doing “odd” jobs around his home and most importantly helping others.

A special thank you to the medical personnel and staff at Ascension St. Vincent Riverside and Community Hospice Center for their love, caring and support during Al’s final days. Also, the family would like to extend their sincere gratitude to Ponte Vedra Valley Funeral Home for their guidance and understanding during this difficult time.

In lieu of flowers, donations are asked to be made in Al’s name to Catholic Charities of Jacksonville. Please visit https://www.ccbjax.org/ and click on the donate option and follow instructions to donate in Alan’s name.