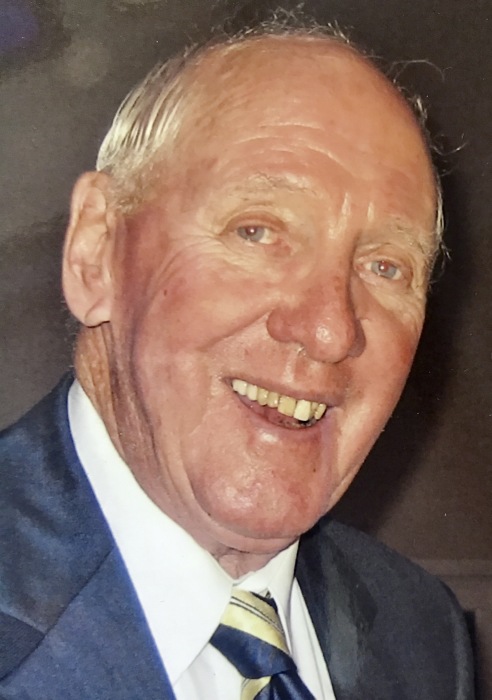 Faithful husband to his loving bride Jane of 58 years, wonderful brother, loving father of five, special uncle to seven nieces and nephews, godfather, and a super grandfather (Papa) to 10 remarkable grandchildren:  such is the prelude of the proud legacy of Clifford James Binns, born October 24, 1929, and gone to God June 5, 2017.

Just “a skinny kid from Inwood, New York,” Cliff, known to his older brother as “Ace,” was a stickball loving, Yankee rooting youth, living just eight subway stops from “The house that Ruth built.”  Sworn enemy of The Boston Red Sox, Cliff’s favorite Yankee was Joltin’ Joe DiMaggio since DiMaggio played with heart and class.  Having enlisted in the Korean War and rising to the rank of Staff Sergeant, Cliff served four years, and much later wore his Korean Veteran cap with unassuming, patriotic Air Force pride.  Many an occasion—sitting in Andiamo’s restaurant, having a dinner for six paid for by a perfect stranger on Veteran’s Day, or walking through the hallways of a Disney resort—Americans shook his hand and thanked him for his service.  Cliff maintained relationships with many of his Air Force brothers throughout his life, which gave him much joy.

An intellectual at heart, Cliff voraciously read all genres of books (usually three at a time), The New York Times, The Florida Times-Union, and several sports, golf, variety, and news magazines—if he was your teammate playing Trivial Pursuit you always won.  Moreover, his love and service to his community remained paramount, serving in various capacities including several homeowners associations both in Ponte Vedra Beach, FL., and Dix Hills, New York. A crucial member of the vestry at Saint Laurence of Canterbury Episcopal Church in South Huntington, New York, Cliff enjoyed serving his church and will be remembered for providing strong council and wise leadership.   Cliff was also an active member of Christ Episcopal Church in Ponte Vedra Beach during Reverend Jim Cooper’s tenure.

Aside from Cliff’s most passionate love, reading, his retired years revolved around family visits, his grandkids, domestic and European vacations, weekly trips to Ponte Vedra library, and rounds of competitive golf at Oak Bridge Country Club, scoring a hole-in-one on its third hole at 80 years young.  Cliff was an active Tuesday and Thursday golfer in the men’s league for over 30 years, playing the game he loved for seven decades.  And as is his character, he never stopped searching for the perfect swing. His last golf game was six weeks ago.    Many friendships and happy memories resulted from his years of golf.   In his later years, Cliff thoroughly enjoyed his weekly Bridge games with his players and partners, as well as exercising at the YMCA.

Cliff was a first generation American whose mother hailed from London and whose father came from the British West Indies, eventually settling in Manhattan. His parents always instilled in him a sense of caring and compassion for others.   It was during his time growing up in Inwood that he would become a movie buff.  He saw all the great movies (The Plainsman and Gunga Din his favorites) many times, and always had exciting stories of his own times growing up on Dyckman Street.  Cliff was a great storyteller and always had a new joke that was sure to make you laugh.   As his brother-in-law John notes: “Thankfully, we have a treasure trove of stories about Cliff growing up in Manhattan, about memorable Yankee games, about his successful career at Exxon (then Esso at the time), and of course the trials of raising five children while seeking to maintain his and his devoted wife's sanity.  Cliff was interesting to people because he was interested in people. He asked a million questions but was sincerely interested in your answers to all of them. He lived his long life in accordance with the Judeo-Christian ethic.”

Cliff passed away quietly after a short illness. He will be remembered for his closing remarks in greeting cards, which says so much about him: “Love and kindness, Cliff.”  He will indeed be remembered as a devoted husband, father, brother, grandfather, and family man, as well as a quick witted, business savvy, politically minded, and voracious reader:  the patriarch of his family.  Cliff was devoted to his family, his church and to his country, and served them all with distinction.

Condolences can be sent to 105 Poseidon Lane, Ponte Vedra Beach, Florida, 32082.   In lieu of flowers the family encourages donations to The Wounded Warriors Project or the Ponte Vedra Public Library.