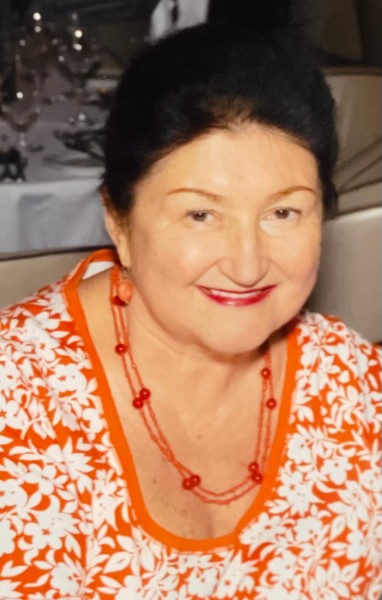 Doris Manukian was born June 22, 1936, in Breslau, Germany, to Erik and Charlotte Weise.  Doris passed away unexpectedly but peacefully on April 14, 2021 in Jacksonville, Florida.  She is survived by her beloved husband of 62 years, Nurhan Manukian, who was at her side; her brother, Manfred and his family in Germany; her two sons, Ara and Lloyd, and their wives, Belinda and Lilit; along with her three grandchildren, Thomas, Aimee and Isabella; all who live in Florida; and a wonderful extended family and countless life-long friends.  She will be missed by all her knew her.

At age 18, Doris immigrated alone from post-WWII Germany to New York City to start her new life in America, where she eventually met her "Prince” Nurhan, who proposed to her in Central Park, New York City. Married in 1959, Doris and Nurhan then traveled the world together with their children; both working and living in countries from Thailand, the Philippines, to Libya in North Africa.

All while being a dedicated and supportive wife and full-time mother, Doris was determined to achieve a life-long passion of returning to school and pursuing a career in education.  At the age of 38, Doris was a member of the first graduating class of the University of North Florida in 1975 with a B.A. in Education and Journalism.  She continued to obtain her Masters in ESL and Special Education at Kean College in New Jersey.  One of her proudest accomplishments was to have been named in the Who's Who Among Students in American Universities and Colleges.

Doris continued as an English, ESL and Special Education teacher, before retiring as chairperson of the ESL department at Florida Community College of Jacksonville. Doris also enjoyed taking cruises (over 50 since retiring), writing about her life experiences and world travels, and was a long-time participant in a local writer's group and a frequent guest columnist in various Jacksonville area newspapers and magazines.

A Graveside Service will be held Saturday, April 24, 2021, 2:00 pm at Ponte Vedra Valley.  A memorial remembrance event will be held at a later time (post-COVID) to celebrate Doris and her life.

Services will be livestreamed and will be displayed directly below this obituary beginning approximately ten minutes before the service. https://youtu.be/fFvhgkfCnts