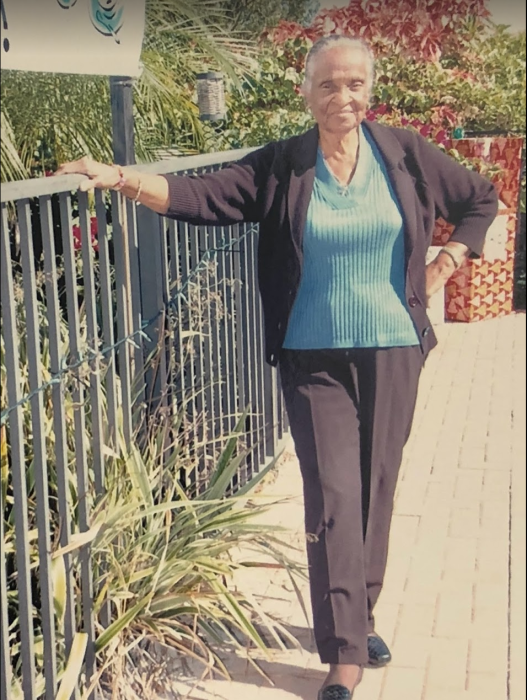 Elsa Veda Hutchinson was born on August 24, 1925, in Vere, Jamaica, to the parentage of the late Rupert Edwards and Martha Aneita Francis. Elsa was educated in Vere, Jamaica and was raised by her maternal grandmother, known to all as Mommie Jessie Ann Francis.

Elsa married her first husband, Cyril George Brightly and there she had her first daughter Claudette Joan Brightly Abraham. Elsa migrated to England in the early 60s like many other Jamaicans trying to find a better life. In England, she had her second daughter, Jen Eleanor Hutchinson Albritton from her second marriage to Rafael Alphonso Hutchinson. Thereafter, Elsa moved to Kenya, Africa where she was quite the hair stylist in her own right. She then later returned to Jamaica and worked with close family members. On September 19, 1978, Elsa made her journey to the states, settled in Long Beach, California and was employed by Kmart Warehouse. She officially retired in the mid-90s, became naturalized as a U.S. citizen on March 9, 1999, and later moved to Jacksonville, Florida in 2002.

Elsa was preceded in death by her brother, Gene Maitland. She leaves to cherish her memories with her brothers, Glester Maitland and Eddie Edwards of Jamaica; and her daughters, Claudette “Georgie” (Trevor) Abraham of New York, and Jen (John) Albritton of Florida. Her legacy continues with grandchildren and great-grandchildren, and a host of nieces, nephews and other family members and friends.

A Memorial Service followed by a Repass will be held Friday, September 7, 2018, 1 pm at Ponte Vedra Valley.