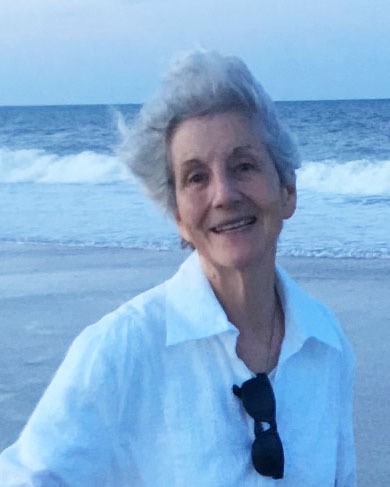 Dr. Harriet “Trink” Mangrum Howe peacefully departed this earthly existence January 21, 2022. A retired professor of sociology, devoted wife, and beloved mother of six, Harriet dedicated her life to service, family, and community.  Her warm and encouraging spirit blessed the lives of all those she encountered.  Harriet was born in Seattle, Washington on June 21, 1935, to Richard C. Mangrum, a Marine Corps aviator and war hero and Virginia Diem Mangrum, an educator, writer, and joyful celebrator of life.  After graduating from Swarthmore College, Harriet married the love of her life, Jonathan Trumbull Howe, on her 22nd birthday, in Washington, D.C.  Their 64-year loving partnership and devotion to each other inspired those around them.

With inexhaustible energy and good cheer, as the wife of a career Naval Officer, Harriet moved and re-settled the family to over 20 locations on the East and West coasts of the United States and overseas in Japan, Belgium, and Italy.  Harriet and Jon moved to the Jacksonville area in 1994, where he served as the Executive Director of the Arthur Vining Davis Foundations.

Always an advocate for the needs of those around her, Harriet was a pioneer in creating networks of support for military families.  She spent her early career establishing the Ombudsman Program for the Navy and eventually all branches of the armed services.  She traveled the globe to deliver training and develop mentorship for the program, strengthening communication between a command and its families, improving the lives of military families worldwide.

A keen intellectual, Harriet pursued graduate studies in international relations at Yale.  While juggling the demands of motherhood and responsibilities of her life as a Navy spouse, she earned her master’s degree in human development at National University in San Diego. At the age of 60, Harriet earned her doctoral degree in sociology from American University and embarked on her career as a professor of sociology, fulfilling a lifelong dream.  She taught at both Jacksonville University and the University of North Florida.  Passionately concerned about child welfare, Harriet developed and taught an innovative child advocacy course for UNF’s pre-law program. She also created popular courses on Family Systems and Human Sexuality, delighting in mentoring young people and encouraging them on their life paths.

A lifelong spiritual seeker and humble servant, Harriet was grounded in the love of God and engaged with meaning and purpose in the many communities where she lived.  During her 25 years in Jacksonville, Harriet was a member of Arlington Congregational Church, UCC.  Harriet’s affirming and warm presence, her humor, and the love that shone forth from her until the day of her death will continue to light our way.

A memorial service for the local community will be held at Arlington Congregational Church in Jacksonville on January 29th at 3pm.  Burial will take place at Arlington National Cemetery at a later date, along with a celebration of her life. Arrangements are being coordinated by Ponte Vedra Valley Funeral Home.  In lieu of flowers, contributions may be made to the Harriet Howe Sociology Endowed Scholarship at the University of North Florida established by Jon and Harriet Howe or to the Navy-Marine Corps Relief Society.