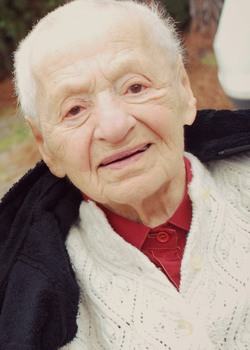 Helen Diamant, 99, of Jesup died Saturday, June 4, 2016 at her residence. Helen was born Chella Wildenberg on January 19, 1917 in Kozienice, Poland and was a resident of Jesup the past 18 years. Helen was a Holocaust survivor who tragically lost all of her family and after the Holocaust, she immigrated to New York City and raised her children with her husband. She shared her story of the courage and bravery it took to survive the Holocaust with anyone she could, including young children in her community. Not only was Helen an inspiration of hope to others, she was a beloved grandmother, mother, relative, and friend who will be greatly missed. She was predeceased by her husband, Howard Diamant; son, Louis Diamant.

Survivors are her daughter and son-in-law, Laura and Richard Siegleman of New York; 2 sons and daughter-in-law, Robert and Tena Diamant of Ponte Vedra, Florida and Michael Diamant and Kristen Gibson of Jacksonville Beach, Florida; 3 grandchildren, Rachel Diamant of Ponte Vedra, Colby Harris and Jordan Harris of Jesup; 2 great grandchildren, Isla Harris of Jesup and Caylen Harris of Hinesville. Towards the end of her life, Helen received a substantial amount of care from family and caregivers.