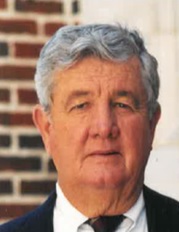 Jim Niel Moreland, age 84, passed away on Saturday, June 4, 2016, in the Bailey House of Community Hospice. He recently returned to St. Augustine and resided at the Glenmoor Retirement Community.

Jim was born in Detroit, MI, on December 6, 1931, and moved with his family to Miami, FL, where he spent his childhood. Jim’s family moved to St. Augustine where he graduated from Ketterlinus High School. In high school, he was co-captain of the football team, leading the Yellow Jackets in winning the 1949 championship of the East Florida conference.  He was also voted "Most Popular" in the senior class.  After marrying his sweetheart, Mary Ruth Phillips, he attended the Engineering School at the University of Florida. He graduated in 1954 and remained a passionate Gator for life. He began his engineering career at General Electric and settled for more than 15 years in Roanoke, VA.  Jim always took advantage of professional challenges, and tackled management positions with General Electric in Lynn, MA. His career continued with positions in several corporate settings, including Youngstown Sheet and Tube Company, and finally at Rockwell International, where he served as Vice President with responsibility for Research and Development.  He took special pride in his team’s contribution to aerospace technology incorporated into the NASA Space Shuttle.  He also enjoyed consulting for a number of manufacturing startup companies.

Jim and Mary Ruth returned to Florida upon retirement, and enjoyed many happy years in the Marsh Landing community in Ponte Vedra Beach. For the grandchildren (who all called him “Bop”), the highlight of a summer was a special trip with a friend to visit their grandparents. Together, they enjoyed fishing in the backyard lagoon, playing in the surf and pool, and visiting the Alligator Farm. In 2014, Jim and Mary Ruth settled into the Glenmoor Retirement Community.

Jim could always be found caring for wildlife, including his favorite ducks, squirrels, and birds. He loved dogs and greeted each dog he encountered on his daily walk. His cat, Inky, was very special and he created all types of games to entertain this black cat.

A Celebration of Life will be held on June 18 at 1:00 p.m. at the GLENMOOR CLUBHOUSE, 235 Towerview Drive, St. Augustine (use Call Box at gate).

In lieu of flowers, the family suggests a memorial contribution to MAGI for the Glenmoor Scholarship Fund, 235 Towerview Drive, St. Augustine, FL 32092.