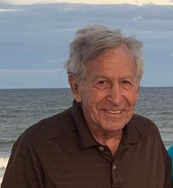 Jay was a graduate of University of Florida in 1960 and received his PhD from the University of Illinois in 1964.  After completing his education, Jay became a Professor at NC State University in Raleigh.  He started a new department at NC State called Marine, Earth, and Atmospheric Sciences and became its first Department Head.  He orchestrated the construction of a new building in the middle of campus to ensure this new department would be well-received and set up for success.  He loved being a part of the faculty and seeing the young, vivacious college students pursuing their education.

While at the University, Jay served on several state committees including the role of Assistant Secretary of Natural Resources for the state of NC.  He was appointed as a member of the National Advisory Committee on Oceans and Atmosphere by Gerald Ford.

After 20 years at NC State, Jay was offered the position of Managing Director at the Harbor Branch Foundation in Ft. Pierce, FL.  While there, the Foundation was asked to deploy its ships and submersibles to assist NASA and the Navy in locating and identifying wreckage of the Space Shuttle Challenger.  This was an exciting opportunity that brought national attention to Harbor Branch.

After leaving Harbor Branch, the Langfelders spent a winter skiing in Salt Lake City, before retiring in the Plantations in Ponte Vedra Beach, FL. Jay continued to consult on geotechnical-related events and stay active playing tennis and golf.  Pat and Jay lived happily in this beautiful community for over 25 years.

Jay was an avid water and snow skier, tennis player and golfer in his younger days, but recently spent much of his time reading, consulting, and visiting family.  Their son Keith passed away in July 2021 after a motorcycle accident left him paralyzed almost 8 years ago. This loss and other health related issues took their toll and his life abruptly ended on the morning of the 10th