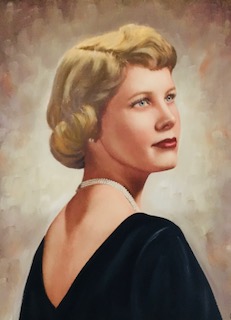 Loretta was born January 4, 1929, in Edwardsville, Illinois, the daughter of the late Edward John Arth and Grace Joslin Arth. She was one of seven children and is survived by Viola Hessel (deceased Raymond), Joyce and Joe Giardina, and Mary Arth (deceased Alvin). Proceeding Loretta in death, were her sisters Evelyn Mihalic (deceased Steve), Iola Henderson (deceased Gordon), and brother Irvin Arth.

Loretta was an avid golfer, wonderful cook and traveled extensively with Nelson, seeing all corners of the globe, but her home was where she was the happiest and her children were her pride and joy. She is survived by her, sons, Nelson (Shannon Lynch), and Joseph (Julie Ann Brunsky); daughters, Linda Martus (Daniel), Loretta Erba (deceased S. Michael), Ann O’Hara (Robert).

Loretta will be deeply missed by all of us, including her 5 great-grandchildren, nieces, nephews, and friends.  We will remember her as a beautiful, kind, Christian woman who spoke well of everyone.

A Mass of Christian Burial will be celebrated at 3:00p.m. Friday, April 6, 2018 at Our Lady Star of the Sea Catholic Church of Ponte Vedra Beach, with Rev. David Keegan as Celebrant.  Entombment will follow in Ponte Vedra Valley, 4750 Palm Valley Road, Ponte Vedra Beach.

Thank you to Community Hospice, Cassandra, Celita, Nettie, Diane, Espie, and Our Lady Star of the Sea Eucharistic Ministers, Barb, Liz and Kay. May our beautiful mother rest in peace.