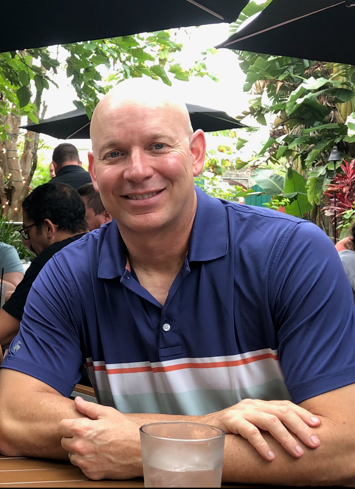 Michael Wayne Guenzler was a loving husband and father of two girls. Mike enjoyed participating in activities that pushed his physical limits, especially CrossFit. He had a penchant for life and always lived in the moment. Even more than staying active, his greatest joy was spending time with his wife of 18 years, Eilla, and his daughters, Isabella and Sophia. Mike was an eternal optimist and always saw the good in others. Even though COVID brought forth many difficulties, he was able to use the situation in a positive manner by being able to spend more time home with the family, as business trips were put on hold. During this time, he perfected his golf game and even persuaded Eilla to take golf lessons. Family game nights also became frequent, and many hours were spent trying to win first place in Mario Kart to earn bragging rights with his daughters. Mike and the girls also enjoyed traveling the world. They had many memorable trips, including visits to Europe and Asia. Closer to home, frequent trips to Disney were a favorite weekend activity.

Mike’s generosity also extended to his numerous friends and colleagues. He was a master storyteller who always had a captive audience.  Even though some stories were on repeat, you could not help but be entertained. He was social and enjoyed hosting his friends. During get togethers he was an attentive host and always made sure he took care of his guests.  He also used these gatherings as an excuse to barbeque meat, since half his household never ate it!  Driving his Jeep, cheering for his beloved Cardinals and Blues teams, and watching James Bond movies and Ted Lasso on television were among his many other interests.

He was born on April 16, 1970, in St. Louis, MO, to Gerald Richard Guenzler and Darwa (Jean) Cotton. He attended Northwest High School and graduated with the class of 1988. He graduated with a finance degree from Missouri State University and continued his education, receiving an MBA. Mike was a successful businessman, and his latest role was working in cybersecurity as the Chief Information Security Officer for Venerable.   He enjoyed sharing his knowledge during symposiums and mentoring others. He recently joined the board of the American Red Cross and was active in the community.

A Celebration of Life Visitation will be held in Mike’s honor on Sunday, October 17, 2021, at 4 to 6 pm, with prayers immediately after at Ponte Vedra Valley. The Celebration of Life service will be livestreamed on Monday, October 18, 2021, at 10 am.  The livestream link will be available directly below this obituary beginning approximately ten minutes before the start of the service.

In lieu of flowers, the family requests memorial gifts be made to a College Fund for Mike’s Daughters, Isabella and Sophia: