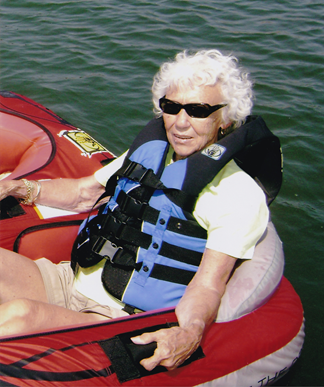 Nellie Jane (Nell) Campbell departed this Earth to be with the Lord on February 6, 2018.

Nell was born in Orbisonia, Pennsylvania, on July 5, 1925, and spent her later years in Ponte Vedra Beach, FL. She was preceded in death by her ex-husband, Daniel Berkley Campbell Sr., her husband, Ward Putt, and her daughter, Nancy Campbell.

Mrs. Campbell led a wonderfully fortunate life. She graduated high school at 16, received a full scholarship to Juniata College in Huntington, Pennsylvania and graduated at 20. An independent woman, she traveled alone by bus to Woodstown, New Jersey, and in 1945 began a lifelong career in education, beginning as a high school math teacher. She completed her Master’s in counseling at the University of Delaware in 1973, at the age of 48. As a high school counselor in the 1970's, she was an excellent role model and an advocate for young women in the early history of women's liberation. At 70, after not attending her 50th reunion at Juniata College, she received a call from her college sweetheart and began a second marriage with the late Ward Putt (God had a plan).

Mrs. Campbell had many hobbies, reading, exercising, watching football, she was a die-hard Eagles fan, and often surprised people with her football knowledge. But mostly she played bridge. She was an excellent bridge player….she loved to play and she loved to win! She played both at the Players Senior Center and the Cabana Club in Ponte Vedra Beach. Most of all, she loved to spend time with her children, grandchildren and great-grandchildren.

Mrs. Campbell also loved to travel and spent a great deal of time visiting other countries throughout the world. Her many friends at assisted living will tell you Mrs. Campbell could shop....for a bargain....and they chuckle and giggle when telling stories about her many shopping adventures!

A strong intelligent woman, she will be missed by all who knew her.

May she rest in peace.

A private memorial will be held and in lieu of flowers donations can be made to the American Diabetes Association.