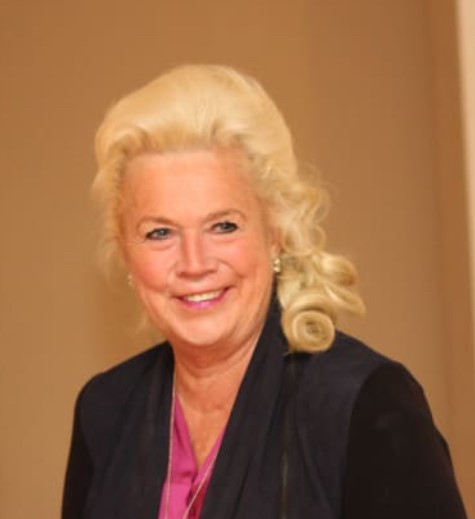 She is survived by her brother, Henry W. Juan III and his spouse, Marilyn of Greenwich, CT; her nephews Tucker Gibbs Juan of Jacksonville, FL, Henry Alexander Juan of NYC, her niece Elizabeth Hall Juan of NYC, and her sister-in-law Catherine Gibbs Juan of Seacrest Beach, Fl. Pam is predeceased by her brother Peter Duane Juan and her sister-in-law Diane Hall Juan.

Pam spent her academic years as a student at The Convent of the Sacred Heart in Greenwich, CT where she excelled both academically and athletically. When her mother dropped her off for her first day at school, she was greeted by a member of the religious order who said “Thank you. We’ll see you in 12 years”. Little did Pam know that 57 years later, her life would come full circle as she moved into the little yellow Head of School cottage on the same campus to become the first lay Head of School in Sacred Heart’s 161 year history.

Under Pam’s leadership where she aspired to “do great things for others”, she spearheaded notable improvements to the curriculum, as well as school facilities. The latter included the addition of state- of- the- art field hockey and lacrosse turf fields that rivalled those facilities at the collegiate and professional levels. Most importantly, however, Pam represented the inspiration and embodiment of the teachings of the school’s founder, Saint Madeline Sophie Barat who strongly believed in the education and development of young women as participating members of the Catholic community. Based on this premise, Pam served as a powerful example of what young women could achieve both academically and spiritually. As a vibrant personality, with humor, poise and grace, she left a lasting legacy for a whole generation of students with dedication and integrity as her steadfast principles.

Her academic career was as rich, diverse and impressive as her character. Upon graduation from Sacred Heart in 1964 she attended Briarcliff College for her undergraduate degree, followed by Manhattanville College where she received her master’s degree in Education. Pam’s early career was highlighted by several years of teaching in Sun Valley, Idaho at the Ernest Hemingway School, until she returned to her Alma Mater in Greenwich to teach Middle School English. This was followed by several years at the Convent of the Sacred Heart at 91st Street in New York City, where she served as Head of the Middle School until her transfer back to Sacred Heart in Greenwich where she continued her role as a Middle School Head.

In the late 1990’s, Pam moved to San Francisco to become the head of the girls’ elementary school at Schools of the Sacred Heart and then later became the Director of the Schools, the second lay person in the history of that school to occupy the position. With the imminent retirement of her long-time friend and colleague, Sister Joan Magnetti, rscj, Pam returned to her roots in 2009 as Head of School at Sacred Heart Greenwich where she served until the close of the 2020 academic year. Pam subsequently enjoyed a brief retirement in Ponte Vedra Beach, Florida where she spent time at the beach with her family and friends until her untimely passing.

Pam’s deep religious conviction, her humor and compassion and unique leadership qualities were the hallmarks of this remarkable woman. For those who knew her and were touched by her, she will be remembered fondly as a beacon of spiritual power and love.

In remembrance of Pam’s life, the family asks that any charitable donations be made to the Pamela Juan Hayes ’64 Endowment Fund and sent to the Advancement Office at Sacred Heart Greenwich, 1177 King Street, Greenwich, CT 06831.