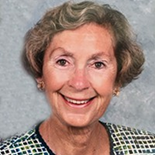 Patricia Goddard of Ponte Vedra, Florida passed away peacefully on September 1st, 2017. She was 93. Pat was born Patricia Garrison in Des Moines, Iowa and was the only child of Florence and Blaine Garrison. She attended North High School and furthered her education at the University of Iowa where she received her degree in Elementary Education in 1945. In 1948, she married Paul Mason to whom she was happily married for 52 years until his passing in 2000. She was the mother of three boys - Rex (married to Heath Phillips), Erik (married to Charlotte "Niki" Schaeffer), and Kirk (married to Eileen Grant), five grandsons, Garrison, William, Ian, Brendan, and William, and one great granddaughter, Lauren. Pat lived many years in Minnetonka, Minnesota where she applied her undergraduate degree to be active in the education of her three sons. She was elected to the Minnetonka school board and served as its secretary for several years. Pat also became the Director of Volunteer Services for Abbott Northwestern Hospital and Sister Kenny Institute, a position she held until she and Paul retired to Ponte Vedra, Florida in 1989. In Ponte Vedra, she was a member of Christ Episcopal church and was active there in services to the community. Pat was also a member of the Ponte Vedra Inn and Club where her sons and grandchildren spent many hours enjoying the beach and golf course. In 2005, she became a resident of Vicar's Landing and found love again late in life when she met John Goddard. John and Pat were married in 2008 at Christ Episcopal Church in Ponte Vedra when both were 84. They are the oldest couple ever to have married in that church. John and Pat were wonderful friends and companions for more than nine years until John's death in April of this year. Pat was known for her strong set of values. She instilled them in her children and grandchildren. She also placed a tremendous emphasis on the importance of education. She will be remembered for her sweet and caring nature, her kind and gentle smile, and as "awesome grandma" by her grandsons. The family would like to express their gratitude to the staff at Vicar's Landing for their care and compassion for both Pat and John through their years at Vicar's and particularly Geanie Ortiz and Jean Shaw, in the Vicar's Health Center. They would also like to thank Melanie Kimmel and Sarah Anthony who assisted Pat immensely during her later years. A memorial service is scheduled for Christ Episcopal Church in Ponte Vedra, Florida on October 6 at 2 PM with an interment to follow at Ponte Vedra Valley Cemetery. Because education was something in which Patricia Goddard strongly believed, the family requests that in lieu of flowers, contributions be made to The Vicar's Landing Members' Trust Fund to support continuing education for the staff of The Vicar's Landing Continuing Care Retirement Center. Contributions can be sent to: Member's Trust, 1000 Vicar's Landing Way, Ponte Vedra Beach, FL 32082 with the attention to the Member's Trust for the Employee Scholarship Fund.