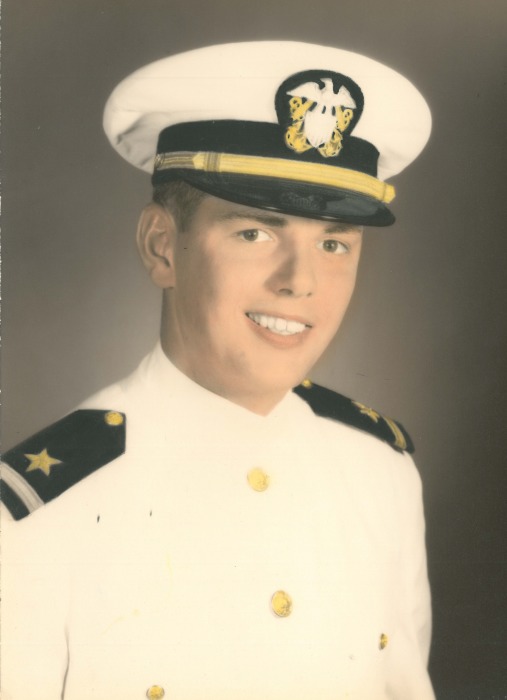 Richard L. Cain passed away peacefully at Community Hospice of Northeast FL, March 26, 2017, joining his lovely daughter, Leslie Cain; sister, Nancy Sloan; cousin, Charles Goodall, as the most recent to pass.  Dick was born May 28, 1936, in Pittsburg, PA.  He graduated from Westminster College in 1959, and then from Naval Officer’s Candidate School in Newport, RI, in 1960.  Entering the US Navy as an Ensign, Dick was stationed on P3 Aircraft with VP49 in Bermuda.  He retired from the Navy with the rank of Commander in 1981, after tours and commands on the east coast of the US.  Along with his wife, Janet, he started the businesses Mandarin Paint & Decorating, and A & J Interiors.  Dick also worked as a licensed contractor with C & R Custom Building Homes in Plantation, Azalea Point and Queen’s Harbor.  He leaves behind, what he called his greatest treasures: wife, Janet; daughters, Melissa May, Anita Lancaster (Art); his beautiful grandchildren and the joy of his life, Ellis, Brianne, Gaige, and Stephanie; his sister- in-law, Gail Greenblatt; brothers-in-law, Dick Bruder (Barbara) and Bill Sloan; many cousins, nieces and nephews from the Sloan and Goodall families; and his special “Forever Friends”.  A Funeral Mass will be held at Our Lady Star of the Sea Catholic Church, 545 A1A North, Ponte Vedra Beach, FL at 1:00 PM Tuesday, April 4, 2017.  A private family internment will follow at Ponte Vedra Valley Funeral Home and Cemetery.  In lieu of flowers the family asks everyone to consider a donation to Sea Mark Ranch, 3631 Seamark Ranch Rd., Green Cove Springs, FL, 32043.