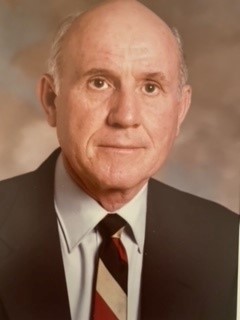 Ronald Somerville, age 100, passed away peacefully in his sleep on July 3, 2021, at Community Hospice of Northeast Florida. Ron was born to Norman and Gertrude Somerville on August 1, 1920.

He received a Bachelor of Arts degree at Geneva College in 1943 and a Master of Education at University of Toledo in 1967. Ron worked in education for over 38 years acting as a teacher, coach, principal, superintendent over the years. He served as a principal at North Street School in Rittman, Ohio for fourteen years where he was inducted into the Rittman School’s Wall of Fame in 1987 for superior contribution to the development of school age youth. He was described by his peers as compassionate, respected, organized, loyal, and as someone who put the wellbeing of his students and community first. He was dedicated to serving his students academically and spiritually and lived by this advice given to him by his father, “I must never forget that I am a servant of the most high. A servant of God and of the people”. Upon his retirement in 1981, Ron said he would continue to serve his community; “I may retire from this position, but I’m not intending to retire from work… I hope to be of service to humanity”. After retirement, Ron and his wife, Margaret, moved to Florida to enjoy time with family.

He married his wife, Margaret Somerville, August 21, 1969, and they were married for 42 years until she passed away in 2010. He will be buried by her side at Ponte Vedra Valley cemetery at a private service to be held for the family.

Condolences to the family may be sent to ronscondolences@gmail.com