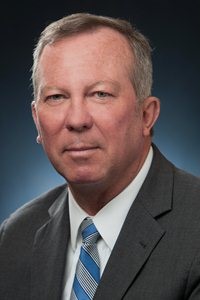 Steven Woodard, 64, of Jacksonville, FL, died Wednesday morning, June 29, 2022.  He was a loving husband, father, and grandfather. Steve was preceded in death by his parents, Carl Clifton Woodard and Doris Long Woodard, and a brother, Tony Woodard. He is survived by his wife of 39 years, Linda; three children, Kelly Pinto and husband Mark, Steven Woodard Jr., and Kaitlyn Shafer and husband Bryan; four grandchildren, Alexandra, Arabella, Olivia, and Maya; two brothers, Mike Spivey and Gregory Woodard. Steve was adored by his family and friends and was a respected member of his community. He will be greatly missed by all who knew him. Steve was born on September 14, 1957, to Doris and Carl Woodard of Hampton, VA. He graduated with a master’s degree in 1982. He began his lifelong career of service working for the Colonial Williamsburg Foundation in security. He left the foundation after five years to begin his career with the Secret Service, which he joined in November 1987, as an agent in the Norfolk, VA field office. He held positions as Special Agent in the New York field office and Special Agent in Charge of the Richmond, VA, office. He was assigned to Secret Service Headquarters in Washington, DC, and he also served as the liaison with the FBI for one year. One of his favorite assignments was the Special Events Division where he worked at the Salt Lake City Olympics. Steve oversaw security during the Super Bowl after 911, and he also worked internationally in a variety of events around the world. From 2008 to 2013 he served as the top administrator in the Federal Emergency Management Agency in Washington, DC. Steve also managed the National Response Coordination Center, National Watch Center, FEMA Operations Center, Disaster Emergency Communications, and the Urban Search and Rescue Program. He joined the team in Jacksonville in 2013 as the Director of Emergency Preparedness until March 2022. As Director, he was responsible for overseeing the preparation, prevention, response, recovery and mitigation in all-hazard environments. He helped navigate numerous emergency situations facing the citizens of Jacksonville, including the COVID 19 pandemic. Steve’s career ended as the Health and Safety Supervisor for Yellowstone season 5. His funeral will be held at 11:00 AM on Wednesday, July 6 at Crosswater Community Church, 211 Davis Park Rd., Ponte Vedra, FL 32081, immediately followed by burial at Ponte Vedra Valley Cemetery.