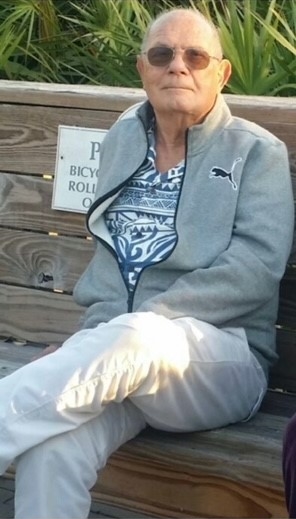 Thomas Smith Murray, 87 years old, was finally reunited with his beloved in the kingdom of heaven on March 25, 2022, in the comfort of his youngest daughter Heather’s home in Valdosta, Georgia. Tom was born on December 27, 1934, in Jacksonville, Florida. He was the son of Edward and Sally Murray.

Thomas graduated from Andrew Jackson High School and was in the class of 1952. He continued his education and later graduated from Brigham Young University in Provo, Utah, with a degree in history and a minor in business. Following his education, he served in the United States Air Force Reserve for six years and then went on to work for the Bell Telephone Company for many years.

Tom married the love of his life, Janice Stewart Murray, on June 7, 1959, in Los Angeles, California. She was the light of his life and the true apple of his eye. The couple was married for 60 wonderful years and left behind their beautiful family. The couple is survived by five of their beautiful children: Brent, Dale (his wife, Dana), Stephanie, Paul, and Heather. Their legacy continues through their grandchildren: Alexa, Ryan, Jordan, Blake, Dalton (his wife, Alia), Dakota, Savannah (her fiancé, Walker), Austin, and Dallas. And their memory will last a lifetime as they also are survived by three, soon-to-be four, great-grandchildren. Tom would be honored to say that he loved all his brothers and their children without limits, as well as his children, grandchildren, and great-grandchildren. Tom loved all his nephews and nieces as if they were his own and was lucky enough to have so many come to him as their famous “Uncle Thomas.”

He is preceded in death by his both of his parents, Edward and Sally Murray, as well as all his brothers: Talmadge Murray, Edward “Bud” Murray, Robert “Bob” Murray, Julian Murray, and his youngest brother, Lauren “Larry” Murray. Amidst the sadness of losing Tom, the family finds the most peace knowing he is reunited with the woman he loved most, his wife, Janice Murray.

Tom was a man of many talents and gifts, but the one title he held with the most honor was being a humble servant of his Lord and Savior, Jesus Christ. He was a member of the Church of Jesus Christ of Latter-Day Saints, where he held various leadership positions, from being a first counselor to being a bishop and even the president of the elder’s quorum. He served his two-year mission trip to Los Angeles, California with two of his lifelong friends: Johnny Thomlinson and Bud Cotrell.

By many, Thomas was known as Tom. But to some of his favorite people, he was called “Dad,” “Popie”, or “Uncle Thomas.” However, to his beautiful bride, he was referred to as “Big T.”  In addition to being a man of the Lord, Tom was a family man that found so much joy in his family’s company. He loved to cut jokes and tell old stories. However, his favorite thing was enjoying his wife’s infamous, glorified brownies, with a glass of cold milk, and with those he loved the most. Tom was a family man who possessed a servant’s heart, a man who was delighted to give others a helping hand. He was a man of many things and one thoroughly admired by both his community and family.

At 11 a.m. on Thursday, March 31, 2022, a remembrance service will be held at the Ponte Vedra Valley Funeral Home, 4750 Palm Valley Road, Ponte Vedra Beach, Florida 32082. Immediately following, the dedication of the grave will occur under the direction of the Church of Jesus Christ of Latter-Day Saints. Those who wish to attend his viewing, it will be held in the funeral home’s chapel on Wednesday, March 30, 2022, from 5 p.m. - 7 p.m.

Tom's funeral will be livestreamed directly below this obituary beginning approximately ten minutes before the service.