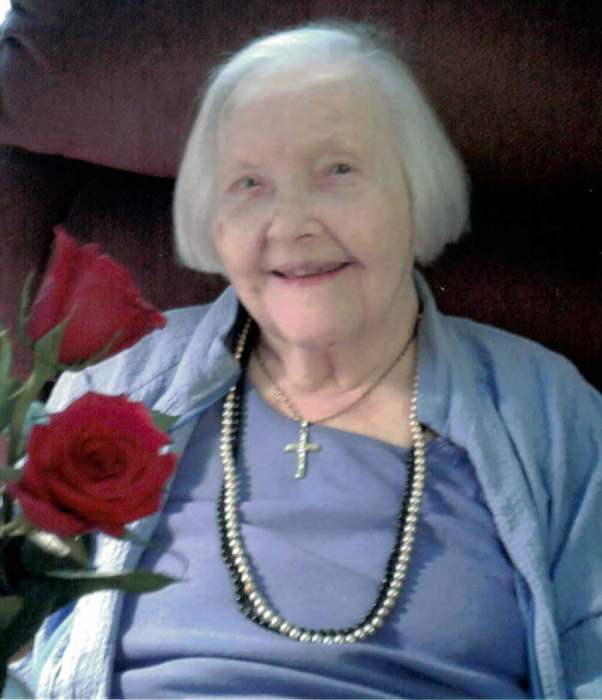 Virginia Newton Warden, 99, passed away peacefully in her sleep on Sunday, Jan. 22, 2017, in Jacksonville, FL.  She was born December 19, 1917 in Passaic, N.J.  She was preceded in death by her father, George Warner Newton; mother, Frances Shinn Newton; sister, Barbara Newton Rode; husband, Harold H. Warden; granddaughter, Heather Fowler and grandson, Mark Massey. Virginia lived in several places will growing up, which shaped her generous and gracious character:  NJ, Caracas, Venezuela, Paris, France, Palm Beach, FL.   Virginia graduated from Glen Ridge High School in Glen Ridge, NJ, before attending New Jersey College for Women and majored in Engineering.  Virginia proceeded to Kathryn Gibbs Secretarial School in NYC, NY, and became a top notch administrative secretary.  Virginia and her husband, Harold, an Aeronautical Engineer, met and married in 1941, while both working for Curtis Wright Aviation in NJ.  "Ginnie" and Harold raised four children while living in Montclair, NJ, Binghamton, NY, Atlanta, GA, and subsequently residing in Encino, CA, and Westalke, CA.  In her later years, as a widow, she lived with and near her daughter and son-in-law, Mary and Aaron Massey and found herself in Nashville, TN, and ultimately in Jacksonville, FL.  Ginnie is survived by four children, Thomas, an attorney in Woodland Hills, CA, Annette (Gary) Warden-Camp of Corvallis, OR, Elizabeth (Vern) Cook of Thousand Oaks, CA, and Mary (Aaron) of Ponte Vedra Beach, FL.  Along with several cherished grandchildren and seven very special great-grandchildren.  Ginnie loved her pets, especially her dogs and cats.  She became a consummate volunteer after retiring as a Hospital Administrator in Encino, CA.  Ginnie was active in The Republican Women's Club of Los Angeles, where she spent endless hours at the polls, signing hundreds up to vote and assisting several in obtaining their citizenship of this country that she so dearly loved.

The Daughter's of the American Revolution found a loyal, hard working, and delightful member who rose to the ranks of Fernando Maria Chapter Regent several times, District Director and State Parliamentarian (she also became a certified Parliamentarian in 1989) of CA. She remained a member of DAR with the Cumberland Chapter in Nashville, TN.  Virginia was an Elder of the Presbyterian Church and walked in faith, which was displayed throughout her long life

"Well done, good and faithful servant". May you find joy in Heaven and with those loved ones who have gone before you. Any donations in her honor can be made to the D.A.R.

The family wishes to acknowledge, with deepest appreciation, the services and care of Harbor Chase Assisted Living in Jacksonville, FL, where Virginia lived her last three years, and Community Hospice of Northeast Florida.